Science teachers usually concentrate on the body of knowledge that forms their discipline. Students should also understand the process of scientific inquiry; the understanding should come through their experiences with the process in the science classroom and outside school.

What exactly do we mean by “inquiry”?

‘Inquiry’ is referred to in the science education literature to designate at least three distinct but interlinked categories of activity:

This coexistence of the term explains partly the confusion associated with the implementation of ‘inquiry-based science education’ (IBSE), a term in itself used as an umbrella for various educational approaches, characterized by the differing emphasis they put on these three distinct ‘inquiry’ activities.

The US National Research Council’s defines inquiry as “a set of interrelated processes by which scientists and students pose questions about the natural world and investigate phenomena; in doing so, students acquire knowledge and develop a rich understanding of concepts, principles, models and theories...and learn science in a way that reflects how science actually works” (NRC, 1996: p.214).

Inquiry-based science education has also been described as teaching and learning science as inquiry and by inquiry (Tamir, 1985; Chiappetta, 1997; Zion et al., 2004). Learning science as inquiry includes learning about the way in which the scientific endeavor progresses, and analyzing the inquiry process performed by others, sometimes using historical perspectives (Bybee, 2000; Schwab, 1962). Learning science by inquiry, on the other hand, involves the learner in raising research questions, generating a hypothesis, designing experiments to verify them, constructing and analyzing evidence-based arguments, recognizing alternative explanations, and communicating scientific arguments (Tamir, 1985).

Inquiry-based learning (IBL) is gaining popularity in science curricula, international research and teaching. Inquiry-based learning is an educational strategy in which students follow methods and practices similar to those of professional scientists in order to construct knowledge (Keselman, 2003). It is a process of discovering new causal relations, with the learner formulating hypotheses and testing them by conducting experiments and/or making observations (Pedaste, Mäeots, Leijen, & Sarapuu, 2012).

Often it is viewed as an approach to solving problems and involves the application of several problem-solving skills (Pedaste & Sarapuu, 2006). Inquiry-based learning emphasizes active participation and learner’s responsibility for discovering knowledge that is new to the learner (de Jong & van Joolingen, 1998). In this process, students often carry out a self-directed, partly inductive and partly deductive learning process by doing experiments to investigate the relations for at least one set of dependent and independent variables (Wilhelm & Beishuizen, 2003).

The idea of teaching science by inquiry has a long history in science education. There is an equally long history of confusion about what teaching science by inquiry means and, regardless of the definition, its implementation in the classroom. Inquiry-based learning has been officially promoted as a pedagogy for improving science learning in many countries (Bybee et al., 2008; Hounsell & McCune, 2003; Minner et al., 2010), and since the publication of the ‘Science Education Now: A renewed Pedagogy for the Future of Europe’ report (Rocard et al., 2007) proclaimed as one of the top educational goals for Europe (following similar actions in US by the National Research Council, 1996, 2000; Education Development Center, Center for Science Education, 2007).

Inquiry-based learning aspires to engage students in an authentic scientific discovery process. From a pedagogical perspective, the complex scientific process is divided into smaller, logically connected units that guide students and draw attention to important features of scientific thinking. These individual units are called inquiry phases, and their set of connections forms an inquiry cycle.

The way an inquiry cycle is presented usually suggests an ordered sequence of phases. However, inquiry-based learning is not a prescribed, uniform linear process. Connections between the phases may vary depending on the context.

Often different descriptions of inquiry cycles in the research literature use various terminologies to label phases that are essentially the same. A preference for one term over another is not consequential as long as the terminology has been clearly defined and understood. It is important to examine how inquiry phases relate to the path along which an inquiry reasoning process proceeds.

Following a detailed analysis of 32 articles, the analysis of the descriptions and the definitions of inquiry phases presented in the articles reviewed led to a new inquiry-based learning framework that includes five general inquiry phases:

Some of the Inquiry phases include several sub-processes, but all phases of the inquiry learning process are closely connected with each other and provide a structure aiming at increasing the efficiency of the learning activities conducted with online labs and additional learning tools in the Go-Lab Portal.

In the first two phases of the cycle (Orientation and Conceptualisation) the opportunity is given to the students to gather information on a research question, take notes and build hypotheses and questions they want to investigate. Appropriate tools (like concept-map templates, search software, scratchpads, hypothesis-builder, etc.) to help students to work on their own can be provided by the teachers in the Inquiry Learning Spaces.

The actual interaction with the online lab happens in the third phase, the Investigation (which includes Exploration, Experimentation and Data Interpretation activities). Here the students collect specific data and check whether a hypothesis is correct or not by conducting personalized online experiments. Also, the students can gather experiment results and conduct guided interpretation of the collected data.

During the last two phases of the inquiry learning process (Conclusion and Discussion), the students learn how to write scientific explanations linking their hypotheses with the evidence collected during the investigation phase. Further, they are reflecting on their learning processes and outcomes, comparing and discussing them with other students. Teachers can evaluate learning results of their students and define further steps for the next classes. 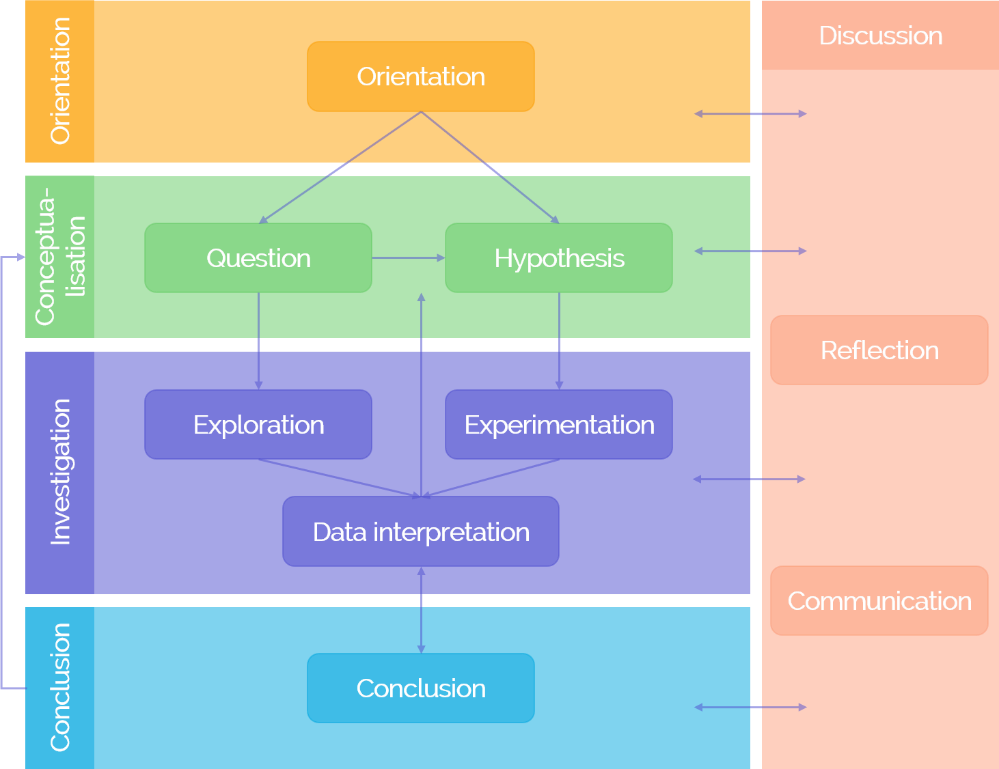 Several quantitative studies support the effectiveness of inquiry-based learning as an instructional approach. A meta-analysis comparing inquiry to other forms of instruction, such as direct instruction or unassisted discovery, found that inquiry teaching resulted in better learning (mean effect size of d = 0.30) (Alfieri, Brooks, Aldrich, & Tenenbaum, 2011).

A meta-analysis by Furtak, Seidel, Iverson, and Briggs (2012) incorporated studies using a broad range of terms to describe inquiry-based learning (e.g., mastery learning, constructivist teaching); they reported an overall mean effect size of 0.50 in favor of the inquiry approach over traditional instruction.

A positive trend supporting inquiry-based science instruction over traditional teaching methods was found in a research synthesis by Minner, Levy, and Century. Reviewing 138 studies a clear advantage was indicated for inquiry-based instructional practices over other forms of instruction in conceptual understanding that students gain from their learning experience (Minner et al., 2010).

In addition, it has been demonstrated that web-based guided inquiry-based learning can improve different inquiry skills, such as identifying problems, formulating questions and hypotheses, planning and carrying out experiments, collecting and analyzing data, presenting the results, and drawing conclusions (Mäeots, Pedaste, & Sarapuu, 2008).

The information related to Inquiry Based Learning is taking from:

Phases of inquiry-based learning: Definitions and the inquiry cycle

Schwab, J.J. (1962). The teaching of science as inquiry. In Brandwein, P.F. (Ed.), The Teaching of Science. Cambridge: Harvard University Press.

How to use Go-Lab